Hi-Ho Hi-Ho it's off to work we go

Day 1 of work was a hot, safe and productive day, also bringing clarity to some of the specific projects we will be doing.

Without having a translator or knowing what to expect on a job site it can be somewhat stressful. Yet in devotions this morning we talked about God's will and how, though we may not know exactly what it is or the purpose of it, it is always greater then we know. And sure enough we arrived to the much tidier job site ,with work done on the 3rd dormitory we were not expecting. And in regards to the langauge barrier, our go to person at the center, she can not speak english, but second best, german (As many of you know we have multiple people on our team who can also speak German). Sure enough God provides in mysterious ways. With that we were able to quickly find out what was wanted of us and were able to get started promptly after arrival to the rehab center.
Here are a few pictures from our days work. ﻿ 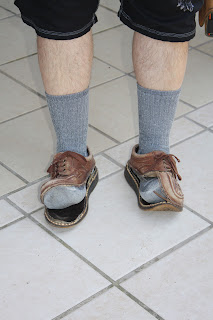 Can you guess who's feet... Dwight's shoes fell apart immediately after putting them on at the job site, thankfuly the center had extra shoes lying around that he could borrow for the day. 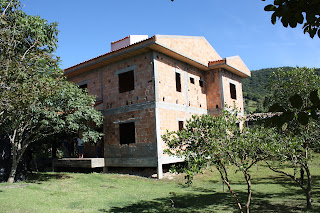 The 3rd dormitory with a (unexpected) finished roof, awaiting to be wired, mudded and painted. 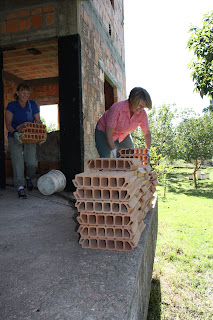 And as often is the case the first task involves some cleaning up. Shirley and Ann doing a great job. 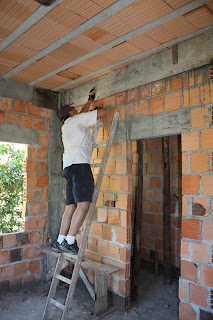 Rudy taking down some of the old frames that were used when the cement was poured in the ceiling. 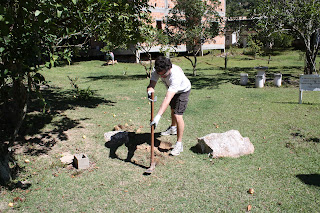 Since the delivery fee was to expensive to have a trencher delivered from Leduc we became the trenchers oursleves for the wire that would be run to the 3rd dormitory, Jeff just getting started. 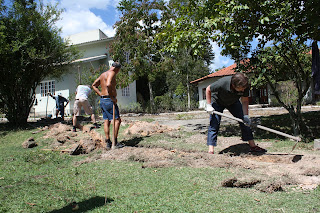 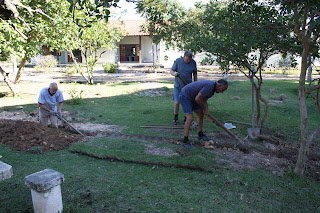 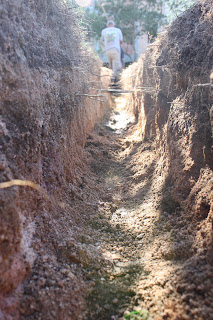 Until after 6 hours of taking turns, too many blisters to count, and a broken spade, we completed the task at hand. 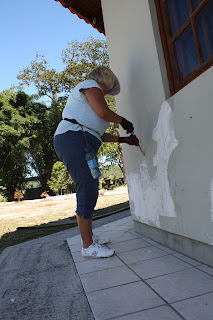 Julie scraping off old paint on the outside of the dining/kitchen facility in preparation for the much needed paint job. 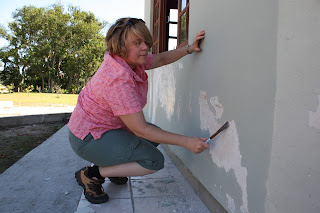 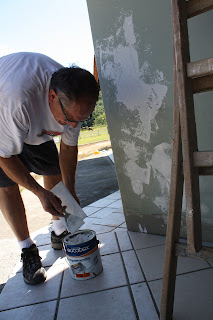 Rudy doing his part in helping prep the walls for painting. 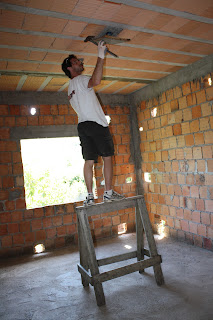 Jeff starting on preping the boxes for the electrical work. 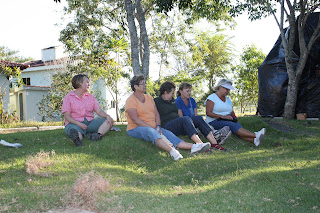 After working a hard day and no tasks left for the ladies, they found a spot on the grass and cheered on the men till supper was ready.  (L to R Ann, Jeanette, Karen, Shirley, Julie)
Thanks for your prayers, and please continue to pray as the work continues, both for safety and health in the heat.
To God be the Glory!
Posted by For We Care at 17:41